Immediately to the west of Los Angeles, Santa Monica, California is a beautiful ocean-side community that has a little bit of everything. The city first originated as beach getaway around the turn of the 20th century. Wishing to sell train tickets on the weekends, railroad companies built the city’s first amusement park along the local pier. The region sees over 300 days of sunshine every year. Because it sits next to the ocean, temperatures stay around 70 degrees almost year round. Due to its proximity to the beach, great surf spots, and downtown Los Angeles, the city has grown into one of the most affluent and eclectic communities in the U.S.

In terms of size, the city remains relatively small. About 93,000 currently live within the eight square miles of the city limits. The average value of homes occupied by the owner is $1.03m. Renters pay an average of $1,593 every month. The median household income is right around $76,000. This is a great place to live, continue reading to find out more.

When visiting the beautiful Kuruvunga Springs, the Spanish missionary Juan Crespi was reminded of the tears of Saint Monica. The name stuck. Land-owning Spaniards first settled the region. During the 18th century, they organized themselves and subdivided their property form a collective city. The 3rd St. Promenade, a remnant from this era, has remained largely unchanged since it was built during this time. It was the original business district of the town. In 1965, the city closed it to traffic and turned it into a pedestrian commercial space. 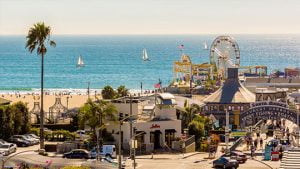 If anyone hears Santa Monica, they immediately remember the pier. While the amusement park that it was built to hold has gone through several evolutions since it was first constructed in the early 1900s, it is still a vibrant attraction. The Santa Monica Looff Hippodrome—a carousal—is a U.S. Historic Landmark. Also on the pier is the La Monica Ballroom, once the largest in the US and the site of several New Year’s Eve radio and television broadcasts. The Civic Auditorium was a central concert venue and even hosted the Academy Awards for a stretch in the ‘60s.
For shopping, you have three main options. Montana Avenue on the north side of town has a series of luxury boutique stores, small specialty shops, and restaurants. Main Street is quirkier, with more clothing stores, restaurants and a variety of retail options. The downtown district has a little bit of everything, including the 3rd Street Promenade that is blocked off for pedestrian use and is home to buskers and street performers.

In terms of geography, the city is mostly flat, inclining slightly down to Ocean Avenue. Bluffs rise along the north side of town. Off to the west is the Santa Monica Bay, and the communities of West Los Angeles and Brentwood border the city to the east.

The city has been a bastion of counter culture for decades. Route 66 ends in the city, after all, and leads the best actors, artists, musicians and writers traveling to California straight into town. The place is filled with galleries, bookshops, and frequent cultural events throughout the year. Several celebrities, such as Jeremy Piven, Jack Black, Larry David, and Dennis Quaid currently live in town, and you’ll be sure to run into several celebrities at restaurants and shopping districts.

In terms of municipal services, this city is one of the most environmentally conscious districts in the US. The city adopted its Sustainable City Plan in 1994, a series of measures that set goals for waste reduction and water conservation. The taxpayer funded Office of Sustainability and the Environment oversees human impact in both public and private sectors. The city has the largest fleet of buses that run on alternative fuels in California, and likely the country. 82% of public work vehicles run predominantly on natural gas produced by A Southern California company called Redeem, which obtains its fuel from methane generated by the local organic landfill.

The city is currently in the middle of their Community Energy Independence Initiative, which seeks to reach complete energy independence by 2020. Since 1990, they have cut their greenhouse gas emissions by 10%.

This community is also home to a state of the art water treatment plant. Every week, it collects 3.5 million gallons of water that would have otherwise run into the ocean. This water is then sent back for the city to use as grey-water. Bio-swales in the city help rain water remain in the city and replenish groundwater. The city also seeks to achieve complete water independence by 2020. If you move to Santa Monica, you will be able to rest easy, knowing that your carbon footprint is a lot smaller just because of where you live.

Our property management team specializes in residential areas throughout Santa Monica, CA. We offer multiple services to take your rental property and convert it into reliable income. We have a thorough screening process that helps to identify the right tenants for your property. Our team works hard to keep both parties happy through effective communication, bullet proof lease agreements, and timely monthly rent collection. We offer maintenance services to enhance the property and ensure that it will retain or increase in value. We oversee everything, allowing you to sit back and relax and know that your property and your tenants are in good hands.

Contact us today if you are ready to receive a comprehensive analysis of your rental property and to inquire about our Santa Monica area property management services.