Located on the Pacific coastline of California, Playa del Rey is a district of the City of Los Angeles and a coastal community of approximately 12,000 people. The name translates as “The King’s Beach,” in Spanish, and according to the Los Angeles Times, the median household income in 2008 was $91,339. The Los Angeles Times also reported moderate cultural diversity in the area with a significant Asian and Latino population. 59.2% of area residents 25 and older have at least a 4-year degree. The median age is a bit older than surrounding areas, at 38 years old. Many veterans reside in the community and make up about 10.7% of the population.

The neighborhood is characterized by rolling sand dunes known as the Del Rey Bluffs, which rise up to as much as 125 feet above sea level. Growth in the area originally surged in the 1920s with land developments seeing many new neighborhoods being built. During the 1920s many Hollywood actors had custom homes built in the community.

More recently, the neighborhood saw a significant population growth. The community added an additional population of about 14.61 percent since the year 2000. According to Trulia, 1974 is the median year that area homes were built, while 2003 is the median move in year. 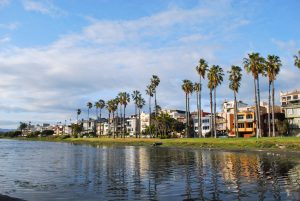 The neighborhood’s local beaches are great for just about any water activities and the options are endless. Great locations exist for a day of fishing, swimming with the family, sunbathing, snorkeling, or boating. Dockweiler Beach is a prime destination in the area and is known as a great spot for surfing the waves. The community also has great oceanside bike paths which wind up to the nearby Marina del Rey and Venice communities. The area is also great for walkers and joggers.

While the beach is one of the main draws of this oceanside California community, the area has many more activities and attractions to choose from as well. The Ballona Wetlands are a beautiful natural feature of the area. The wetlands are some of the last of such significance in the Los Angeles basin. A local volunteer organization, Friends of Ballona Wetlands, works to educate the public and protect the wetlands from harm. The wetlands are great for viewing local wildlife and features popular walking trails that are open for use.

Neighboring communities also offer great things to do. The neighboring Marina del Rey is just a small bike ride or walk away and is an unincorporated community that has the world’s largest man-made small craft harbor. The Fisherman’s Village is a center of culture which has great restaurants, free live music events, and more. The village is great for going on a local harbor cruise, renting a boat, or going fishing.

Playa del Rey is of course a part of the Los Angeles area, and as such, many great activities, historical landmarks, museums, theatres, and attractions are within a short distance at all times. The many beaches of Los Angeles are easily reached for a day of surfing, fishing, or swimming.

California, of course has much more than just beaches and the city amenities of Los Angeles. The Santa Monica Mountains National Recreation Area and Topanga State Park are easily accessible for lovers of the outdoors and feature beautiful sights of mountains, cliffs, and canyons.

Santa Monica, Beverly Hills, Hollywood, and downtown Los Angeles are all within short drives. Other nearby L.A. and California attractions such as Universal Studios Hollywood, the Getty Center, Hollywood Boulevard, the Hollywood Walk of Fame, the Griffith Observatory, the Los Angeles Museum of Art, and much more, are easily reached. Disneyland is just over 30 miles away. The rest of Southern California is also easily accessible.

Playa del Rey is a relatively young community, and most of the area’s development has occurred from the 1920s and beyond. According to Trulia, 1974 is the median year that area homes were built and 2003 is the median move in year. The median household income of the community is reported as $91,339, while the median home value is $647,000. The community has a low density population of 3,542 people per square mile, making it one of the lowest density areas in Los Angeles.

Call us for a comprehensive market analysis of your rental property.

Our property management team specializes in residential areas throughout Playa del Rey, CA. We offer multiple services to take your rental property and convert it into reliable income. We have a thorough screening process that helps to identify the right tenants for your property. Our team works hard to keep both parties happy through effective communication, bullet proof lease agreements, and timely monthly rent collection. We offer maintenance services to enhance the property and ensure that it will retain or increase in value. We oversee everything, allowing you to sit back and relax and know that your property and your tenants are in good hands.

Contact us today if you are ready to receive a comprehensive analysis of your rental property and to inquire about our Playa del Rey area property management services.