Los Angeles, the second most populous city in the United States, includes a diverse population. Its economy is powered by science, education, medicine, technology, and research as well as sports, fashion, culture, the media, and the entertainment industry. It’s divided into over 80 distinct neighborhoods and districts, so the development of the highway system required planning to cover a large area and a tangle of traffic. Due to the risk of earthquakes, the city contains more low-rise than high-rise buildings, and the density of the population is creating growth in apartment units as opposed to single-family housing. The Mediterranean climate provides abundant sunshine with moderate precipitation. Consequently, smog can be an issue from May through October when there is even less rain to wash away pollution, and wild fires are a risk in the autumn and winter when the Santa Ana winds bring warmer and drier conditions. The geography ranges from the beaches along the coast to the hilly areas of the Santa Monica mountains and the much higher San Gabriel mountains. If you are looking for diversity, LA offers it in every way.

The LA area was originally the home of the Tongva and Chumash peoples. Explorer Juan Rodriquez Cabrillo claimed the territory for Spain in 1542. Founded in 1781, the city was part of the California territory that Spain relinquished to Mexico after the Mexican War of Independence. In 1848, the United States purchased the territory after the Mexican-American War. Then, in 1850, Los Angeles was incorporated as a municipality. Five months later, California became a state. With the completion of the Southern Pacific Railroad in 1876, transportation to the area became easier, and the city grew after the discovery of oil in 1892. By 1921, 80% of the of the worldwide film industry was located in LA, which helped the city through the depression. During World War II, Los Angeles became a center of shipbuilding and aircraft manufacturing. Since then, the economy has diversified into a wide array of areas and industries. 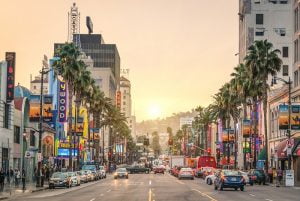 Although not technically an amusement park, Flightdeck, a lesser known attraction, offers one Boeing 737 commercial jet simulator, eight authentic military fighter jet flight simulators, classroom training, and in-flight instructions that enable even inexperienced members of the public to try flying a commercial jet or to attempt air-to-air combat and other aerial maneuvers in a fighter jet, but you will need a reservation. The Officer’s Club displays all the on-going action on large LCD screens.

The Grauman’s Chinese Theater with the adjacent Hollywood Walk of Fame; the Griffith Observatory and Park and the Hollywood Sign, which is on the observatory’s property; the La Brea Tar Pits and Museum; and the J. Paul Getty Museum at the Getty Center are better known landmarks.

The Packing District, a restored area of downtown LA, may not be as well known. It includes the old Citrus Packing House, the Farmer’s Park, the old Packard Building and Car Showroom, and the Backyard. The Packing House offers a community kitchen for private parties, more than 20 artisan restaurants, and live music on the Mezzanine Stage on weekends. The two-acre Farmer’s Park includes community gardens and a redwood boardwalk. The Packard Building dates back to 1925 and currently houses Umami Burger and the Anaheim Brewery. The Backyard, an outdoor venue, offers a fireplace and an orange grove.

Venice Beach is well known for the Muscle Beach Venice Gym, the skate plaza, the canals, and the 2.5 mile circus-like promenade with its mystics, artists, performers, and vendors. The Santa Monica Pier, which is surrounded by the 3.5 miles of Santa Monica Beach and which includes the Pacific Park amusement park, is also well known.

Oak Canyon Nature Center is a 58-acre park with four miles of hiking trails covering three adjoining canyons with a stream that runs through the area.

At Yorba Regional Park, a 140-acre park with four lakes, you can rent a bike and ride bike trails that connect to the 20-mile long Santa Ana River Trail which leads to the Pacific Ocean. Within the park, you can rent kayaks or paddle boats, fish, or sail model boats. You’ll also find a physical fitness course, volleyball courts, horseshoe pits, two baseball diamonds, four reservable shelters, and picnic tables and grills.

Dodger Stadium, home to the LA Dodgers baseball team, features the Hall of Retired Numbers behind the outfield fence and the stadium’s two most distinctive features — the Dodger logo located on top of the 10-story elevator shaft behind home plate and the wavy roofline of the outfield pavilion.

The Staples Center is not only the only NBA venue to host two NBA teams, the LA Clippers and the LA Lakers, but it is also only one of two venues in North America to host two teams from the same league. It is also home to the WNBA’s LA Sparks and the NHL’s the LA Kings.

The NHL’s Anaheim Ducks make the Honda Center their home. The Center is also used for basketball, concerts, and theater events.

Angel Stadium has been the home of the LA Angels baseball team since 1965.

Although the Rose Bowl Stadium wasn’t built until 1922, the first Tournament of Roses Parade was held in 1890. The first football game played in the Rose Bowl occurred in 1923.

Our property management team specializes in residential areas throughout Los Angeles, CA. We offer multiple services to take your rental property and convert it into reliable income. We have a thorough screening process that helps to identify the right tenants for your property. Our team works hard to keep both parties happy through effective communication, bullet proof lease agreements, and timely monthly rent collection. We offer maintenance services to enhance the property and ensure that it will retain or increase in value. We oversee everything, allowing you to sit back and relax and know that your property and your tenants are in good hands.

Contact us today if you are ready to receive a comprehensive analysis of your rental property and to inquire about our Los Angeles area property management services.