El Segundo, California is a city in Los Angeles County. The city’s north and south boundaries are Los Angeles International Airport and Manhattan Beach, respectively; with the Pacific Ocean bordering its west coastline. Its appeal is mainly due to the many talented artists of the city. It is host to more artists, designers, and people working in the media than most community in America. Proven to be a valuable asset in helping shape the city’s character. When it comes to employment, Math and Computers are sought after subjects of interests. There are more people living here, who work in these fields, than in most of the United States.

Parks and recreation in the area consists of its own beach, three public pools, and two large turk fields. Apparently, making an impression because the NBC hit program Parks and Recreation is inspired by the city’s Parks and Recreation staff. In addition, the movie ‘Dude, Where’s My Car?’, where Ashton Kutcher stars with Seann William Scott, was partially filmed in the area. Also worthy to note, CSI: Miami is filmed in parts of the city.

A few notable people, such as comedian Roseanne Barr, Hall of Fame baseball player George Brett and NFL football player Joe Caravello, have homes in El Segundo. The fact that television deems it worthy and stars find it appealing speaks volumes of this charming city. 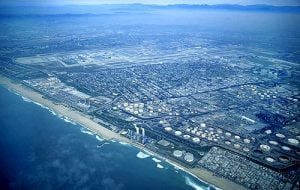 The city offers a variety of activities for the whole family that are sure to pique the interests of many. For example, the charming city is home to the Automobile Driving Museum. The opportunity to drive a one of a kind classic car on the weekends may be enough for many to pack-up their bags and go now.

ArcLight Beach Cities is the perfect movie theatre for any date. Go online, reserve your seat/s and pay before you arrive. In addition to its usual concession stand, the Cineplex is equipped with a gourmet cafe. Cocktails, beer, wine, traditional and international drinks can be purchased upon request. An overall classy place to be.

A local treasure, the Old Town Music Hall, is a throwback to the entertainment industry. Before the main event, music is played, courtesy of a pipe organ, and a comedy show ensues for your entertainment. A unique experience and an old town’s finest hidden treasure!

As of 2013, El Segundo is home to approximately 17,000 people, with six constituent neighborhoods. Somewhat ethnically diverse, reports show that most in the area describe themselves as white, followed my Asian. However, ancestry can be linked to the likes of German, Irish, French, Italian, English and Polish. According to population distribution data, a little over 33% are people between the ages of 35-54.

Decidedly a white-collar city, the workforce employment rate is well above the national average. This can be because the citizens this area are among the most well-educated in the country. Over 45% of people have a bachelor’s degree or advanced degrees, a startling number when compared to the average US city of 21%. The per capita income in 2010 was $42,575, which is wealthy when compared to California and the America.

Not to be outdone, the education department flourishes. The school district is listed as one of California’s 29 academic outperforms by Standards and Poor’s in 2005. The educational attainment in numbers is outstanding, with 95% graduating High School and 45% more graduating from a higher learning institution.

As far has home ownership is distributed, 42% of occupants own their home and nearly 58% rent. The majority of these homes fall under single family detached and complexes or high rise apartments, with two bedrooms being the most sought after, and three bedrooms following. Well-established homes, built between 1940-1969, make up for 58% of occupancy.

There are many reasons why El Segundo, California deserves the spotlight. With the city slowly gaining momentum and a desirable reputation, it is sure to be the next up and coming major event to talk about. It’s an ideal location for beautiful weather, fun and relaxation, simple living and travel. It can easily be called one of the more advanced cities in the nation. For further information, please feel free to contact us.

Our property management team specializes in residential areas throughout El Segundo, CA. We offer multiple services to take your rental property and convert it into reliable income. We have a thorough screening process that helps to identify the right tenants for your property. Our team works hard to keep both parties happy through effective communication, bullet proof lease agreements, and timely monthly rent collection. We offer maintenance services to enhance the property and ensure that it will retain or increase in value. We oversee everything, allowing you to sit back and relax and know that your property and your tenants are in good hands.

Contact us today if you are ready to receive a comprehensive analysis of your rental property and to inquire about our El Segundo area property management services.