Southern California is known for sun, sand and movie stars. It is also home to millions of people in Los Angeles County, California. In the heart of the western metro area lies Culver City. Only minutes from the Pacific Ocean, this affluent community offers some of the best schools in the area. Blessed with perfect weather and a diverse ethnic makeup, Culver City is one of the most desirable communities in the metro area.

First incorporated by its founder, Henry Culver in 1917. As of the 2010 census, the city had a population of 38,883. It is mostly surrounded by the city of Los Angeles, but also shares a border with unincorporated areas of Los Angeles County. An economy based on the entertainment industry, the latest US Census bureau reports the median income for a household in Culver City was $45,792 and the median income for a household was $79,292. Currently, the median home value in the city is $934.300. The average rental is almost three thousand dollars with one bedrooms averaging $2,501 a month and the cost of a 3 bedroom, 2 bath rental property is over $3189. The city has rebounded from the 2008 economic crisis with Culver City home values have going up 10.5% over the past year with predictions of a rise 3.2% over the next year. Call us for a comprehensive market analysis of your rental property. 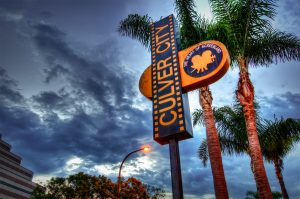 The city identity, from its very beginning, has been intertwined with the film industry and the larger than life figures who populate it. Hundreds of movies have been made in the city’s studios, including the Wizard of OZ and Gone With the Wind. It is home to some America’s most popular TV shows which featured the town’s streets and park in its episodes. You can take tours of Sony Studio to learn about the city’s film history and visit the studios beautiful Art Deco buildings.

But while cinema and the city go hand in hand, you’ll find there’s a lot part to do in Culver City outside of the movie industry. As part of revitalization, the community has become much more pedestrian-friendly getting people out of their cars into mall-like shopping areas. With the advent of mass transit to downtown, it has freed many residents from the necessity of having a car. One of the favorite destinations in the city is the emerging art district. One of the first things you’ll notice is how accessible the district being only minutes walking from the Metro Expo Line’s Washington Boulevard Station. Situated along the juncture of La Cienega and Washington Boulevards, the district has quickly gained a reputation for upscale galleries and trendy eateries. In late spring, the ARTWALK snakes through the district with live music as well as special promotions from local businesses. The one stop everyone makes when they are in town is Helms Bakery originally built in 1930. The landmark has since been rescued as a multi-purpose building housing restaurants, shops and public exhibit spaces such as the annual Patchwork craft fair when it comes to the city. Another shopping destination right across from the metro station is the Platform shopping complex with luxury shopping and upscale cafes.

Along with the galleries, the city has several museums. The Museum of Jurassic Technology is a collection of curiosities of all kinds. A satirical exhibit that challenges the very nature of a museum that is one of the most offbeat attractions in California. The Wende Museum is a small exhibit which chronicles the Cold War and the spy-v-spy intrigue that surrounded it. The Mayme A Clayton Museum and Library houses one of largest private Afro-ethnic collections that concentrates on Black America’s contributions to film. It also hosts many musical performances. The Center Theater Group makes it home at the Kirk Douglas Theater, a beautifully renovated 1950 movie theater in the heart of the city. The Actor’s Gang was founded by Tim Robbins and features experimental theater and politically themed shows at the Ivy Substation.

The city has many popular greenways. There are two bikes along Ballona Creek bike path which connects to the Marvin Braude costal bike path and the Culver Boulevard Median bicycle path runs along Culver Boulevard. Kenneth Hahn State Recreation Area is one of the largest urban parks in California and the views from the Baldwin Hills make it a popular weekend picnic destination. Especially popular is the Baldwin Hills Overlook which provide both great vistas of the city and spectacular sunsets.

The art district is still popular once the California sun goes down if you’re looking for the latest and tastiest. Head to Bar & Garden, where hipsters pick from an eclectic collection of wines, ales, and spirits. After downing some elixir, head to Industry Cafe & Jazz for live music. Another popular spot for a drink with a friend the historic Culver Hot. Once the confines of Hollywood stars, the Neo-Renaissance renovated hotel still draws locals for a nightcap at the hotel’s lobby bar and relive its past glory.

Our property management team specializes in residential areas throughout Culver City, CA. We offer multiple services to take your rental property and convert it into reliable income. We have a thorough screening process that helps to identify the right tenants for your property. Our team works hard to keep both parties happy through effective communication, bullet proof lease agreements, and timely monthly rent collection. We offer maintenance services to enhance the property and ensure that it will retain or increase in value. We oversee everything, allowing you to sit back and relax and know that your property and your tenants are in good hands.

Contact us today if you are ready to receive a comprehensive analysis of your rental property and to inquire about our Culver City area property management services.