Beverly Hills is one of the many interesting cities in Southern California. It is located inside of Los Angeles County. Beverly Hills was originally intended to be an oil town. However, the oil business did not perform up to the level that was expected. The land eventually evolved into prime real estate for housing and commercial development. It is commonly referred to as “90210.” The 90210 zip code is as well-known as the city itself. The world famous Rodeo Drive is a shopping district that attracts tourists from around the country and the world. Celebrities have flocked to the area over the years. It has become a hub for those who have prospered in life and wish to live on a level that is suitable to their means. The city of Los Angeles attempted to annex the town. The inner Council fought back. It was important to them that the community maintained its independent identity. There have been several landmark legal cases related to the property that make up this interesting city. It was originally developed as a whites-only community. The only people of color allowed were those who worked for the whites who lived in the area. Jews were also added to the restricted list.

The city began as a failed oil field. However, the original oil field investors saw potential in the land as a real estate project. They decided to develop the property into a town. It was used primarily as farmland in the late eighteen hundreds. The Beverly Hills Hotel became the area’s first major land mark. The hotel inspired opportunists and investors to become involved with the changing landscape. Many who came to visit the hotel decided to buy into the property themselves. The population grew quickly. The community would soon have enough residents to declare itself an independent city. In 1921 Douglas Fairbanks and Mary Pickford finished a mansion that would be called Pickfair. Pickfair became another landmark and set the tone for what the culture of the area would be. Local actors became attracted to the developing town and began building mansions of their own. Before long the community would draw non-white residents who wanted to be a part of the changing environment. 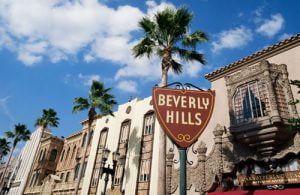 The inner council of the city strictly prohibited non-whites from living in the area. However, a court decision determined that non-whites had earned the right to access what they had worked for. The city of Los Angeles considered the small town as part of its community. This was yet another political issue that would be fought by city council members. They refused to be attached to nearby Los Angeles. The city still remains on its own as an independent metro development. The University of California at Los Angeles began construction in 1925. It holds up as another unique landmark in an interesting community. The Beverly Wilshire Apartment Hotel opened its doors in 1928. It is now known as the Beverly Wilshire Hotel.

Beverly Hills is completely surrounded by the city of Los Angeles. Its bordering neighbors include West Hollywood, Bel Air, Carthay, the Fairfax District and Beverlywood. It is known for having rolling hills and a star-studded landscape. Many of the homes are landmarks themselves. There is great history behind each and every piece of property in the area. Tourists are offered maps that help them discover all of the sites that are available to see in this unique city. Despite the name, many of the residents of the city live in the flat land areas.

The city has grown more diverse over the years. Racial diversity has changed to reflect much of the progressive cities in the country. Whites make up between 70 to 80% of the community’s population. However, Persian Jews represent 26% of Beverly Hills’ religious population. The Iranian Jewish Community is the largest of its kind in the United States. The weather has tropical characteristics. Summers are warm to mildly hot. Winters average moderately low temperatures with periodic rain. The city actually has records of snow on minimal occasions.

The average price for a home in this unique California city is around three million dollars. There are homes and apartments available for rent. Rental prices range in between $3,000 and $5,000 per month. Some properties rent for as much as $85,000 a month.

Beverly Hills exudes the energy of a progressive and developing City. It is occupied by some of the most influential people in the world. However, the town continues to attract personalities from all walks of life who want to experience the historic treasures of this fine community. The city is a landmark unto itself. Its inhabitants are an example of what every American community could be.

Our property management team specializes in residential areas throughout Beverly Hills, CA. We offer multiple services to take your rental property and convert it into reliable income. We have a thorough screening process that helps to identify the right tenants for your property. Our team works hard to keep both parties happy through effective communication, bullet proof lease agreements, and timely monthly rent collection. We offer maintenance services to enhance the property and ensure that it will retain or increase in value. We oversee everything, allowing you to sit back and relax and know that your property and your tenants are in good hands.

Contact us today if you are ready to receive a comprehensive analysis of your rental property and to inquire about our Beverly Hills area property management services.